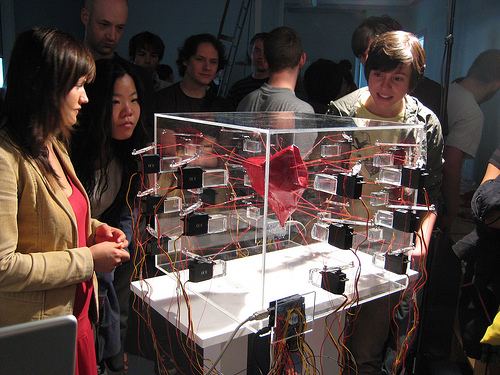 pulse is a live-visualization of recent emotional expressions, written on private weblog communities like blogger.com. Weblog entries are compared to a list of emotions, which refers to Robert Plutchik’s seminal book Psychoevolutionary Theory of Emotion published in 1980. Plutchik describes eight basic human emotions in his book: joy, trust, fear, surprise, sadness, disgust, anger, and anticipation. He developed a diagram in which these eight emotions, together with their weakened and amplified counterparts, form a three dimensional cone, consisting of 24 areas. The cone is the basic form of pulse, which can enlarge in the 24 directions of the different emotions. Each time an emotion tag, or a synonym of it, is found in a recent blog entry, the shape-shifting object transforms itself in such a way that the new volume represents a piece of the overall current emotional condition of surfers on the Internet.