1700 – Wearable Abacus from the Qing Dynasty 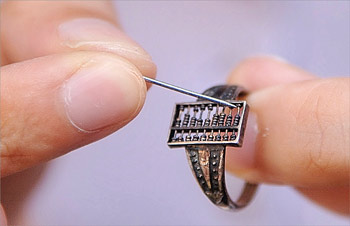 A functioning abacus ring from the Qing Dynasty (1644-1912), exhibited at the Cheng Dawei Abacus Museum in Huangshan City, China. Steve Mann mentions it as an early form of wearable "computer":

Here is a "computer" (an abacus) and since it is a piece of jewelry (a ring), it is wearable. Such devices have existed for centuries, but do not successfully embody Humanistic Intelligence. In particular, because the abacus is task-specific, it does not give rise to what we generally mean by "wearable computer". For example, its functions and purpose (algorithms, applications, etc.) can't be reconfigured (programmed) by the end user while wearing it. In short, "wearable computer" means more than the sum of its parts i.e. more than just "wearable" and "computer". Made with beads of a silver ring abacus of 1.2 centimeter long and 0.7 centimeter wide, dating back to Chinese Qing Dynasty (1616-1911 BC [sic])