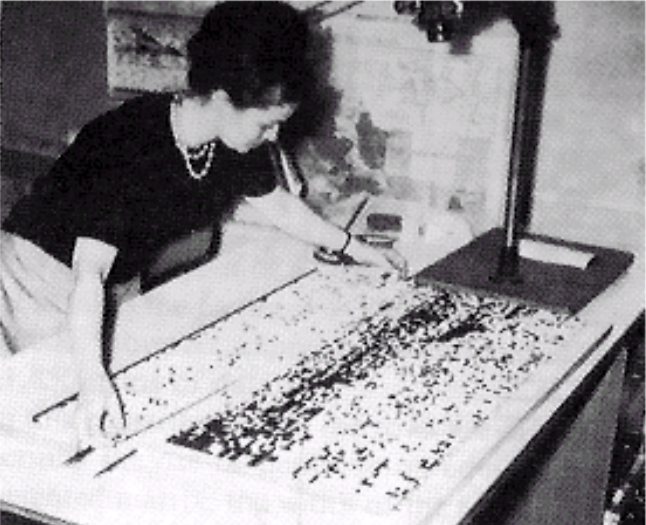 The reorderable matrix is a physical device developed in the mid 1960s by French cartographer Jacques Bertin for exploring and presenting tabular data.

Bertin designed several reorderable physical matrices he called Dominos, each with a different size and visual encoding. The first three images above show a small, medium, and large version. A rod mechanism allowed unlocking either rows or columns for reordering.

The dominos were part of a general method of “graphic information processing”, extensively described by Bertin in a relatively poorly-known 1977 book. This method stems from his progressive realization that, while maps and charts are traditionally drawn once for all, “mobile images” can be freely manipulated to reveal patterns. Thus he recognized the importance of interactivity three decades before information visualization. Bertin physically implemented five types of “interactive” visualizations:

For Bertin, the reorderable matrix was by far the most powerful tool. His method required that numerical data be collected on a paper table to start with. Then, values were converted into discrete steps, again on a paper table (7 to 11 different steps depending on the Domino version). Then, the physical matrix was assembled by choosing among a collection of physical cells that encode different ranges of values. Afterwards, the matrix was reordered to reveal patterns, which could take a long time. Finally, meaningful groups were identified and named. The result was then photographied or photocopied, and the final image was used as a figure in the scientific publication, enriched with a legend and caption.

The first video (fourth image above) shows a reorderable matrix being used. The second video is an educational video explaing the method to a large audience (English subtitles are available). Bertin's method of data analysis, while time-consuming, remained popular for a while and underwent several computer adaptations.